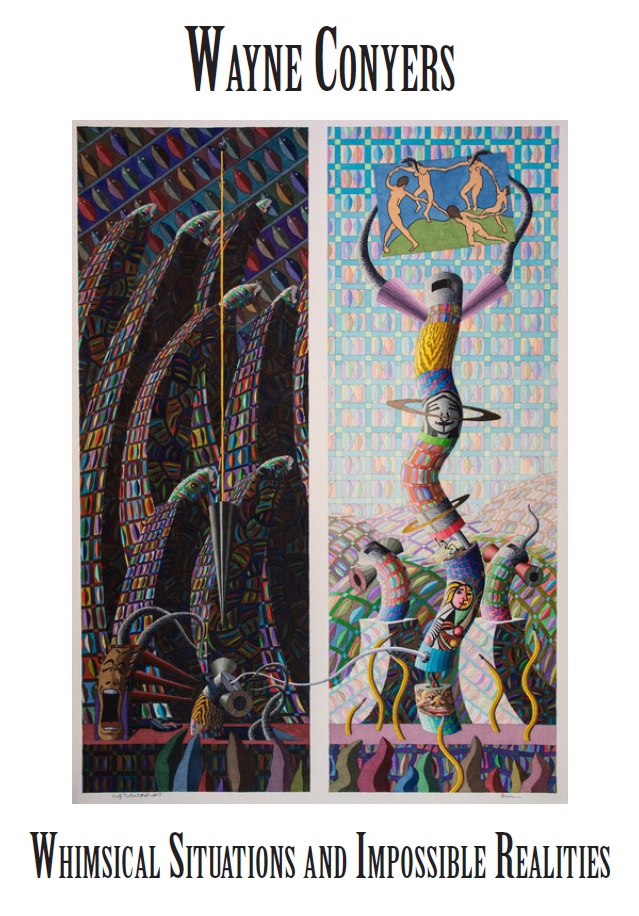 McPherson artist Wayne Conyers is using his art to tackle his fears. Recently retired after 44 years of teaching art, most recently at McPherson College, Conyers compares his decision to retire to free falling.

Conyers explains his process in painting “Free Falling Series: Taking a Leap into the Great Unknown”:

“I’m going to be in a freefall not knowing what in the world is going to happen,” Conyers said pointing out elements in the painting. “This totem, walking off the ledge, that’s me. There’s people who will be noticing how I’m doing along the way. The monopoly house is my security that’s tumbling down into uncertainty.”

His painting series on free falling is part of his new show “Whimsical Situations and Impossible Realities” at the Carriage Factory Art Gallery in Newton through Oct. 12, 2021.

One perk of retirement for Conyers is more time for painting. A piece that might have taken him years to complete in the past now take months, which by Conyers’ measure is fast.

If you look closely at the paintings, you’ll see why his work requires so much time. Each piece has thousands of tiny tri-color tiles painted in watercolors. His work is meticulous and filled with what he refers to as “eye-candy.”

“One of the things that I’m very conscious of is the visual blending of colors rather than the physical blending of colors. I like to put several colors close to each other and then how does the eye blend those together to make a certain color or tone,” Conyers said.

In addition to the free-falling series, there are several additional themed series in the show – paintings based on the issue of appropriation, his interest in theoretical physics, personal issues and experiences and paintings just for fun.

On the subject of appropriation, Conyers has borrowed from “Green Stripe” by Henri Matisse to create “Red Stripe.” The basic shape of the woman is similar, but Conyers has definitely made it his own with incredibly detailed bits of color.

“I have no problem with appropriating the images of others and making them mine in some way. Just copying, that’s something else. Appropriation of images and working with those to make them personal, is something I have a lot of fun with,” Conyers said.

Conyers’ fascination with theoretical physics resulted in paintings like “When Six-Dimensional Matter Deflates, It Produces Two-Dimensional Slabs of Exotic Matter with Red Strings.” Conyers has wrapped his head around string theory concepts and produced a visual interpretation. Another series within the theoretical physics theme is quantum chromodynamic fluctuations, which Conyers described as “a study of the interaction between quarks and gluons. Since this takes place at the sub-atomic level, I got the idea of doing a series based on reducing areas of my paintings to their most basic digital existence–a relationship of pixels.”

The five paintings known as Quantum Chromodynamic Fluctuations #1-5 have more of the appearance of a quilt than a complicated physics concepts but knowing the process that goes into them gives them meaning and depth.

“Whimsical Situations and Impossible Realities” is on display in the Susan Koehn Gallery at Carriage Factory Art Gallery, 128 E. Sixth St. in Newton through October 12, 2021. More information is available at www.carriagefactoryartgallery.com.