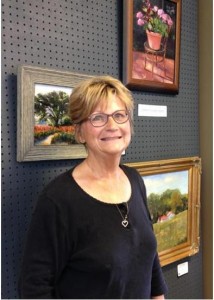 JoAnn Swearingen has been involved with art in one form or another all her life. While in grade school, she won a camera in a coloring contest. As an adult, she was a photojournalist for television stations and daily newspapers before returning to college to earn a Bachelor and Master of Arts degrees at Wichita State University. Her work has been featured in galleries and private collections. Her art, which is representational with a painterly touch, includes landscapes, still life, and portraiture. She is a member of the Carriage Factory Art Gallery and Oil Painters of America.

Accomplishments include selected from over 600 entries from 16 states and Mexico for the Oil Painters of America regional exhibit, Topeka. Juried into an OPA national exhibit; Flint Hills exhibit at Buttonwood Gallery, Kansas City, and Art in the Park. Received first place at the Wichita Lawn & Garden Show; featured artist KSNW TV3 Final Friday special; and other awards and recognition. She has studied with Kandy Tate , Mary Binford Miller and at workshops with Gary Ozias, Jean Chambers, Albert Handell, Anita West, Richard Schmid, and Hugh Greer. Featured artist in the SouthWind Gallery, Topeka, coffeetable book A Spring Day on the Hill.

I feel a connection with the outdoors—nature’s changing moods; the interaction of light and shadow. I try to capture my vision on canvas or an art panel so that I can share a special moment or scene with viewers. I also like painting people in the act of being themselves.