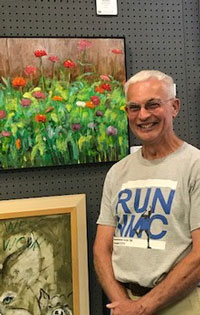 Gene has had a lifetime interest in art. Raised in a family that was quite musical (his mother was a piano teacher, and all five of his siblings have played various instruments, including the piano), his aesthetic sensitivity was aroused early though directed to the Visual Arts.

After practicing general surgery for nine years, Marsh left his practice to get a BFA in painting and attended graduate school at Wichita State University.

Marsh is fascinated by the fragmentation found in modern society. He believes that fragmentation of functions leads to a sense of alienation rather than a sense of interdependence. He feels that man’s spirit can be renewed when he comes to understand his role as part of a community. Particularly fascinating to him is the loss of ancient relation of the artist, priest, healer, and leader in the same person. Marsh feels that in fragmenting these functions, man himself is fragmented and it is his hope that art can help by creating a sense of wholeness in man.