Even though Vernon Rickman worked as a sculptor for the Smithsonian Institution for nearly 30 years, he also created more than 300 oil paintings, numerous sculptures, and hundreds of charcoal drawings in his spare time and during his retirement years in Newton. “He was a Kansan, and he was an artist through and through to the very center of his soul,” said his nephew Ted Scott. A selection of Vernon Rickman’s reliefs and paintings depicting his various styles — figural, religious, landscape and abstract — are on display at Carriage Factory Art Gallery, 128 E. Sixth St., Newton. The exhibit is part of an oral history project on Rickman’s life. Funding for this program is provided by the Kansas Humanities Council, a nonprofit cultural organization that connects communities with history, traditions and ideas to strengthen civic life. Mr. Rickman died in 2013, but stacks and boxes of his work continue to be discovered by his family. “Sculpting and painting were his life, “said gallery president Susan Koehn. “We’ve learned that he was a solitary man, a quiet man whose immense talent impressed his art instructors early-on,” she said. “His artistic style speaks to his broad-ranging interests in politics, philosophy, religion and worldview. We featured an exhibit of his work in 2014, and artists and patrons were amazed that Mr. Rickman’s high level of artistry had essentially been unknown in his lifetime.”

Rickman attended Newton High School, where he studied under art instructor Marie Orr. He pursued art studies in Kansas City and Cleveland, Ohio, before serving in the Korean War. After graduating from the University of Kansas with a degree in fine arts, he joined the Smithsonian as staff artist and sculptor. He worked on major projects still to be seen at the Smithsonian such as the Ice Age Exhibit in the Museum of Natural History. He sculpted likenesses of the First Ladies, still on display at the Museum of American History.

Kansas author Beverley Olson Buller interviewed seven family members and friends as part of the oral history project about Rickman’s life. “Vernon Rickman is an Emily Dickinson of the art world,” Buller said. “Mr. Rickman emerges as a person who was solitary by choice with a great dedication to his family and who left behind a large volume of work as his ‘letter to the world’. I think people will be amazed at the broad scope of subject matter in his work.”

Vernon Reid Rickman was born to Theodore and Mattie Jordan Rickman in Newton, Kansas, on August 4, 1929, and was raised with three sisters and a brother. His artistic ability emerged early in his life. “He always had a pencil in his hand,” remembers his cousin Shirley Elliott. Reid, as he was known throughout his school years in Newton, drew comics as a child, inspired by his father’s favorite cartoon strip The Toonerville Trolley. This led to his life-long nickname of Tooney. Newton High art teacher Marie Orr exposed Reid to a variety of mediums and recognized his talent. He received a first place honor his senior year in the 1947 Scholastic art contest and spent a semester at the Cleveland School of Art before joining the U.S. Army in 1951. Sergeant Vernon Rickman spent six months in basic training followed by 17 months duty in Korea, receiving an honorable discharge in August 1953. His military service enabled him to enroll at the University of Kansas in the fall of 1953, and he received a Bachelor of Fine Arts degree in 1957. Raymond Eastwood, the department chair of drawing and painting at KU, said of Vernon, “Mr. Rickman is a very quiet and unassuming young man whose retiring manner might lead to an underestimation of his abilities which are considerable.”

Vernon’s instructor at the Kansas City Art Institute where he began graduate studies in the winter of 1958 drew the same conclusion. “Vernon is a fine student and has a pleasant personality. He draws exceptionally well”, wrote John Armstrong. Vernon chose to leave the institute, in his words, “to earn a living” and applied in the fall of 1958 to work as a civil servant at the Smithsonian Institution. His work there began in November 1958 and lasted until January1981 when he took retirement. During his time there, he moved from working in the exhibits department of the Museum of Natural History as a technician to model maker to senior sculptor. Much of his work there is uncredited, but I found mention of some of his larger projects in Smithsonian newsletters. In 1970, he prepared 1/5th life-sized models of prehistoric ground sloths for one of five exhibit halls that told the story of paleontology. In 1974, a permanent exhibit “Ice Age Mammals and the Emergence of Man” opened. Vernon sculpted Neanderthal figures under the supervision of three anthropologists. One of them, Allison Brooks, remembered that Vernon …”had done a beautiful set of scuptures but modeled them after an old view of Neantherthals as primitive and not fully upright. When asked if he could ‘just straighten them up a little’, he was quite taken aback but very graciously agreed to try.” In 1975, Vernon sculpted an Indian to ride on a taxidermied horse for an exhibition on South America. He later prepared full-sized mannequins of Pat Nixon, Betty Ford, and Rosalynn Carter for the First Ladies Hall in the National Museum of American History. In 1979, he provided lifelike heads for standard mannequins for a display in the National Air and Space Museum. The staff writer who interviewed Vernon in 1979 found him so engrossed in his art that he continued to sculpt a figure of a man on horseback while talking to her. In that interview, Vernon stated, “My favorites have been the Neanderthal and other anthropological figures I’ve done for the MNH. Most of the modern mannequins used in Smithsonian museums are standard size and are available commercially. But for these anthropological exhibits…I make full-size mannequins to get the height, stooped posture, and head shapes of these early men accurate. After all, you can’t just go out and buy ready-made Neanderthal mannequins these days.”

Vernon’s words reveal the sense of humor family members recall. The fact that he worked as he talked fits with the description I heard again and again of him being very quiet. Another quality that came out in interviews and letters was Vernon’s devotion to his family. While working at the Smithsonian, Vernon would come back to Kansas at least every October to visit and to watch the World Series with his brother Keith. Sometimes he would head his Mustang west to California to visit his sister and his parents who eventually moved there. A letter to his brother Keith in 1965 reveals his frame of mind at that time: “… the thought of Mama isolated in that desert doesn’t set so well with me. I keep visualizing Mama walking up that long path alone, shrouded with age, detached from reality. The true reality that is life and dying all the time and this aloneness is the summation and payment for seventy years of toil. Life is hard and so is death but each has its own reward.” By 1970, he is tiring of work and shares with his brother: “I, too, am a little tired of my job and the city and etc. And wish to do my own work. When I do act I hope it will be from sound judgement and true conviction. One grows old very fast. Time is our ally and executioner. The axe waits but we mustn’t.” Years earlier he had considered working for Disney but decided to stay with the Smithsonian.

His coworkers at the Smithsonian saw only one aspect of Vernon’s talent. Toward the end of his life, his family began to realize that when he wasn’t on assignment, Vernon created truly unique art in the privacy of his own home. His cousin Shirley, herself an artist, observed, “Painting was sort of a sideline and he was sculpting by day to earn his living and painting by night for his own satisfaction. “ In a 1968 letter to his brother, he shared, “Have been doing a lot of painting. Have some large and I think very good things. Perhaps be very successful one day.” His nephew Michael Scott recalls visiting Vernon in Newton following Vernon’s move home after retirement: “I looked at paintings everywhere…paintings in the basement…paintings everywhere. He was painting all the time. And it seems to have continued. He brought a bunch back with him from Washington…He was painting. He had frames…boards…out in his garage that he could just put together…I didn’t see canvas, but he had lots and lots of frames ready to use. He had supplies. He was prepared to paint. And clay…he had boxes and boxes of clay.”

As to his subject matter, his family sees echoes of the farm in Sylvia, Kansas, the family had for a while in some of his landscapes. His letters to his brother reveal an awareness of the political scene. In 1969, he wrote, “Washington, as you probably hear in the news, is getting to be an extremely dangerous city these days for black and white. The white man cannot even comprehend the monster he has created, but it (is) alive and it is devouring all sanity—all it knows is violence.” His nephew Ted Scott noticed trees were prominent in many of his paintings and asked him “Why do you paint your trees like you paint your trees?” Vernon replied, “Anybody can paint a pretty tree.” Ted realized, “It was obvious to me that he wanted to do his own thing.” Ted remembers seeing a sketch of a silo done by his uncle. “Free-drawn, and it’s just perfect. Some people just see the world differently…and he purposefully distorted his artwork…to his own style. He could have drawn it perfectly.” The samples Vernon submitted to the Smithsonian with his application for employment in 1958 bear this out. Each is detailed and finely done, although one featuring a large skull hints at the work he might have been doing at home.
Vernon’s private work was displayed once in his lifetime—at Bethel in 2007, six years before his death but after strokes had brought an end to his ability to use his hands to create art. He left behind over 300 oil paintings and numerous sculptures and reliefs, some of which can be seen here tonight. His nephew Ted shared Vernon’s own words about his art that can guide the viewer:

“You see what he’s put on canvas, look at him, and ask, ‘Where did this come from?’ He felt you had to figure it out for yourself—what did it say to you?”

Buller’s interviews will be preserved and shared in the Newton community and throughout the state, with recordings and transcripts to be archived at the Harvey County Historical Museum and the Kansas State Historical Society.

The public is invited to the opening reception on Saturday, July 9, beginning at 7 p.m. Buller will provide an overview of the life of Vernon Rickman. Rickman’s nephews, Ted and Michael Scott, will share memories of their uncle. Music will be provided by Vada Snider on flute, Ellen Neufeld on oboe, and Heidi Regier Kreider on piano. The event is free.

For more information about the Vernon Rickman exhibit/oral history project, call the gallery at 316-284-2749. 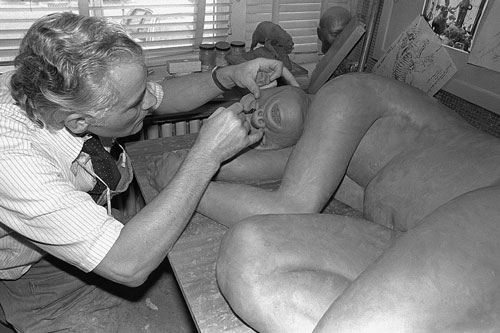 Vernon Rickman at work at the Smithsonian. A large body of his personal work — paintings and reliefs — will be on display and for sale at Carriage Factory Art Gallery, 128 E. Sixth St., Newton. (photo courtesy of the Smithsonian Institution Archives).
###